But as sure as the pinstripes of the suit he sported Friday at The Center were bold, the four-time All-Star was still an active member of the club.

Butler, who helped the Sixers to nine wins in the 12 full games he’s played for the team since being acquired via trade November 12th, was missing in action in losses to the Brooklyn Nets Wednesday and Indiana Pacers Friday. 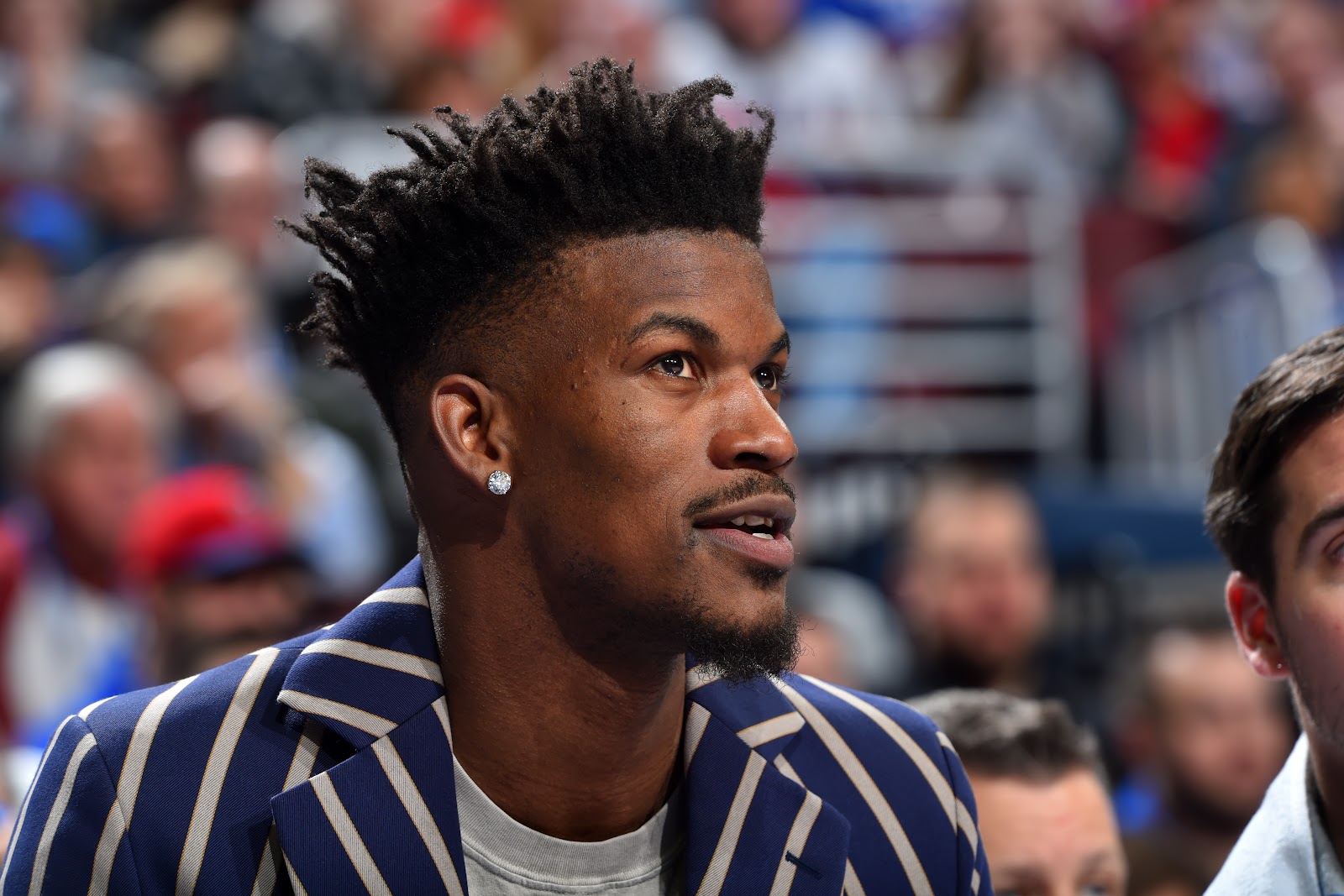 The 29-year old is listed as questionable for Sunday’s matinee at Cleveland, as he continues to work his way back from a groin strain suffered in monday’s first quarter against the Detroit Pistons.

During his absence, though, Butler has done his best to stay busy. If you kept your eye on the Sixers’ bench this week, you might have spotted him chatting up teammates while the games were going on.

The 29-year old was involved in timeout huddles, too, gathering with the rest of the group around Brett Brown.

“He does the same thing in a locker room, at halftime,” said the Sixers’ sixth-year head coach. “He’s incredibly engaged.” 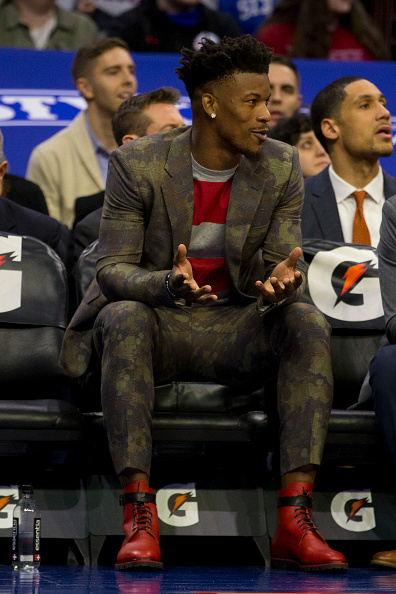 With nearly 20 years experience in the NBA, Brown has noticed not everyone in the league, let alone an established, seasoned star, acts this way.

“Some people would like to be kind of quiet and subdued on the bench,” Brown said. “Some people would prefer to watch it in their own peace in a locker room, and share what they want to share when the team comes in.”

That, certainly, is not Jimmy Butler. 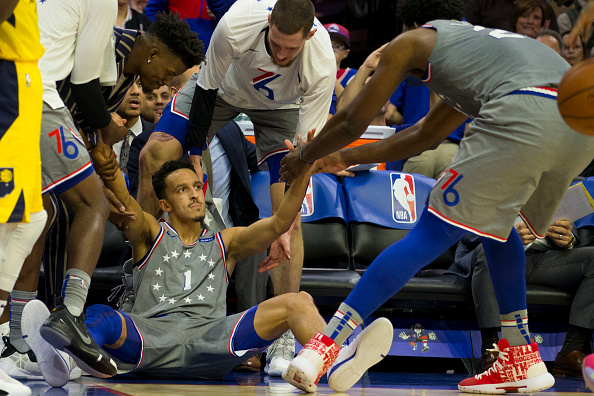 “Jimmy’s in the game,” Brown said. “It just happens to be in a suit [currently]. I appreciate and I respect his desire to contribute even in the environment where he is injured.”

Even in Butler’s relatively brief period of time with the Sixers, it’s been clear to see that when it comes to hoops, he’s all in.

Of all the desirable qualities Butler brings to the table – from his elite defense, to his fearlessness with games on the line – his passion for the sport has stood out to Brown, first and foremost.

“He just is an incredible example of professionalism to our guys,” Brown said recently. “His resume speaks for itself, and that’s all under the fact that, as I see it, he loves his job. He loves basketball.”

It’s a valuable, helpful trait that’s steadily shined through this last month, regardless of whether Butler’s been in uniform, or making the most of his time while sidelined. 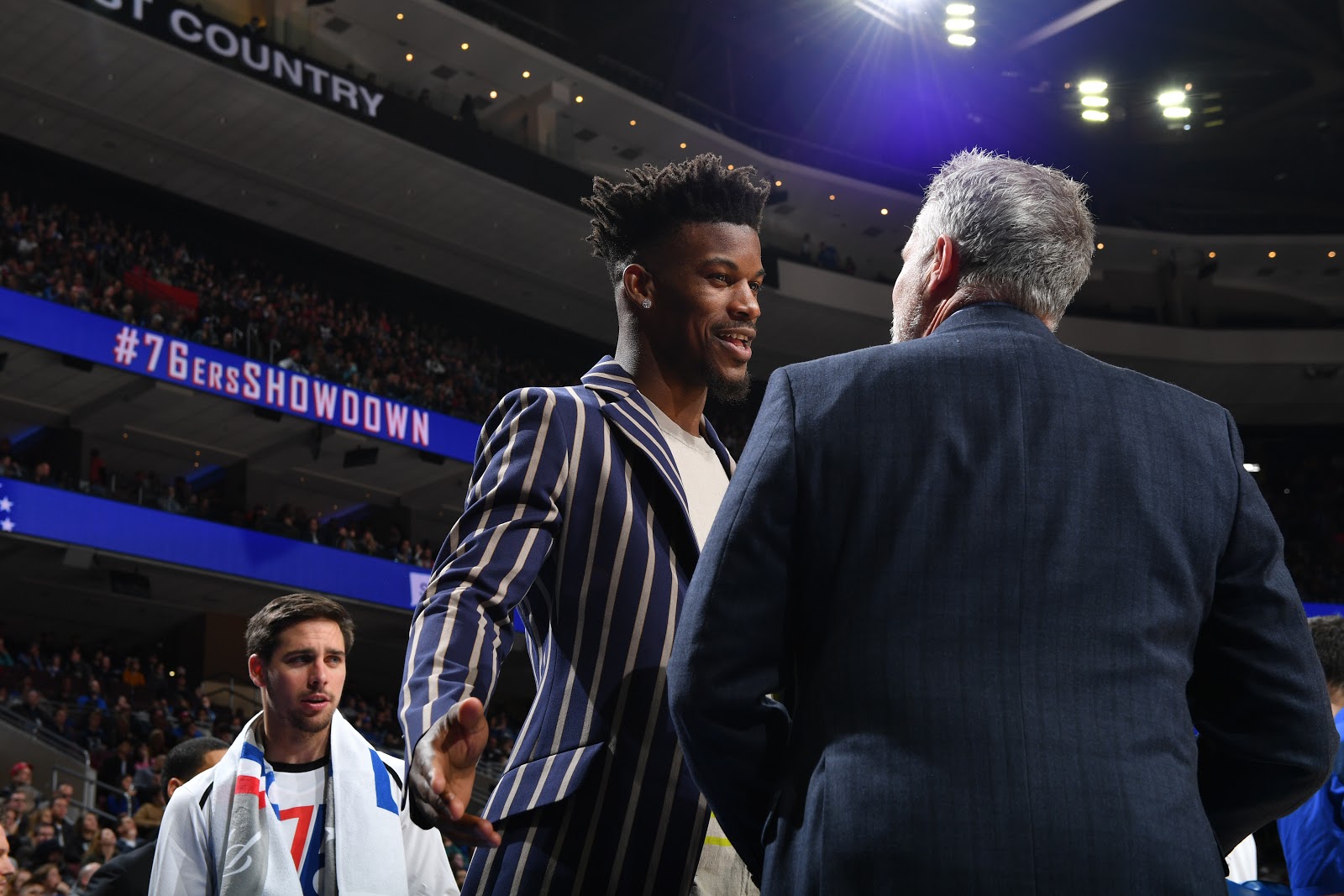 The box score from the 76ers’ November 23rd 121-112 loss to the Cleveland Cavaliers (7-22) is one many fans, and perhaps players and coaches too, would probably rather not revisit.

Cleveland clobbered the Sixers, one of the better rebounding teams in the NBA, on the glass, 42-31, and 14-4 on second-chance boards.

Tristan Thompson was a major part of that effort, with 13 rebounds overall, and eight offensive caroms. The veteran center, however, won’t be available for Sunday’s re-match, due to a left foot sprain.

Also now missing from the Cavs’ roster since the last time they faced the Sixers is Kyle Korver. He was traded to the Utah Jazz a few weeks ago.

Former Los Angeles Lakers guard Jordan Clarkson assumed a key role in Cleveland’s victory over the Sixers last month. He went for all 19 of his points in the second half, with 14 coming in the fourth quarter.