LeBron James loves the New York Knicks, at least where they play

LeBron James loves the New York Knicks, at least where they play

A link has been sent to your friend’s email address.

A link has been posted to your Facebook feed. 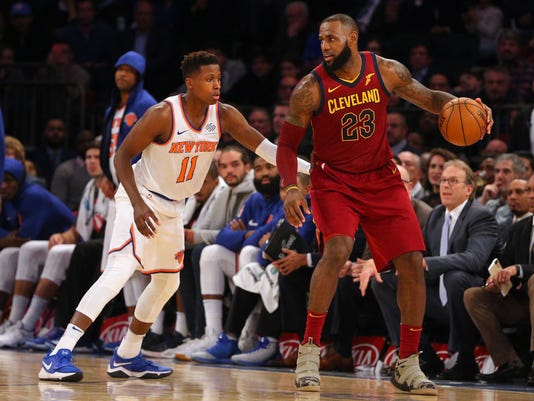 LeBron James loves New York, and he showed it today on Twitter.

The Los Angeles Lakers’ superstar retweeted a #TBT Twitter post by @SLAMKicks that displayed images of him playing at Madison Square Garden during his days with the Cleveland Cavaliers.

James commented on the post, Tweeting, “Can’t wait to play there this year! ‘The Mecca’! Love that place.”

James will have to wait a little while as he and the Lakers won’t be in New York until March 17. The Lakers host the Knicks on Jan. 4.

James is currently nursing a minor groin injury he suffered on Christmas night during the Lakers’ 127-101 victory over the Golden State Warriors.

On Wednesday night, James tweeted about New York’s other NBA team, the Brooklyn Nets, commenting on how exciting their game was against the Charlotte Hornets. The Nets won, 134-102, in double overtime.

Support our journalism. Join us and get your first month free!

Difficult assignment: Knicks’ Noah Vonleh made it tough for the ‘Greek Freak,’ and now he must do it again

Thank you! You’re almost signed up for Fire and Ice

Keep an eye out for an email to confirm your newsletter registration.